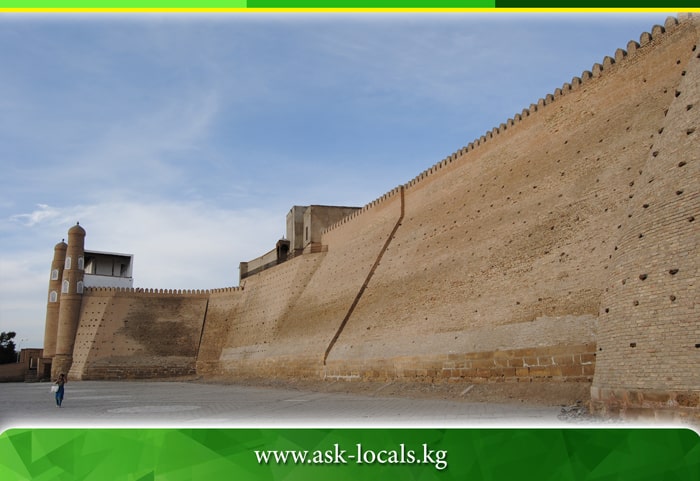 Day 1: Tashkent – Samarkand
When you arrive at Tashkent International Airport you will be met by the driver who accompanies you to the capital. You will have the tour of visiting Independence Square. It is built for the victory over fascism in World War II. After that you will have the chance to walk along the local Broadway. It is situated between Independence Square and Amir Timur square. Later on we will continue to drive to the famous Tashkent metro opened in 1977. Then we will visit the old city including historical sites as Chorsu Bazaar, Kukaldash Madrasah and Hast Imam complex consisting madrasahs, mosques and mausoleum. In addiiton we will drive to one of the sacred places where the Othman Quran is placed. It is the world’s oldest Quran copy which was found in the 8th century. Afterwards  transfer to Samarkand by train. This night will be in the hotel. 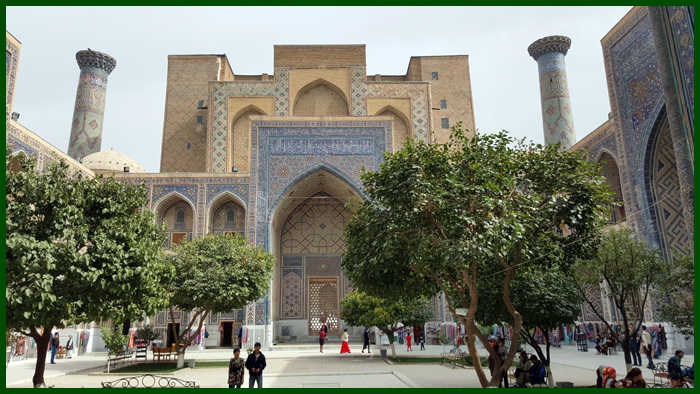 Day 2: Samarkand
Today you will have the city tour in Samarkand. The city is situated in the valley of the river Zerafshan, also it is the second largest city of Uzbekistan as Babylon or Rome. After that you will drive to wonderful highlights as Registan square, Shakhi-Zindeh, Mausoleum Guri Emir and Bibi Khanum Mosque. Talking about Registan Square, it is a complex which consists of Madrasahs (15th and17th centuries). Shakhi-Zindeh consists the collection of mausoleums found in the 11th and 15th centuries. It is also include in the UNESCO World Heritage List. Bibi Khanum Mosque is dedicated to the favorite Tamerlane’s wife after his visiting in India. The night will be spent in the hotel. 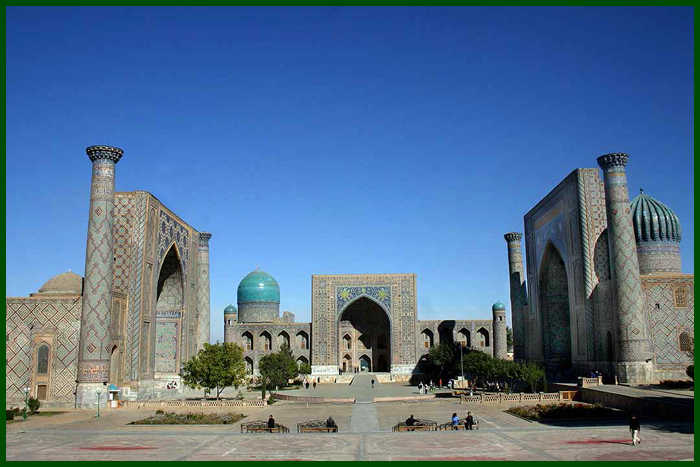 Day 3: Samarkand – Gijduvan – Bukhara
Having a hearty breakfast you will drive to Bukhara city. On the route of a tour you will have a break at Gijduvan village where you can visit the private pottery workshop. Gijduvan is the village of ceramics school and passed from father to son from generation to generation. Nowadays the Gizhduvan is considered to be the home for the sixth generation of potters from Narzullayevs family and worshipped Gijduvan school ceramics all over the world. This school is famed by a geometric pattern. You will be impressed by Green and blue colors existing in decoration of products. Then we will drive Bukhara city. On the way you will visit the memorial complex of Al Bukhary. In general Al Bukhary complex belonged to the Islamic scholar who defined the hadith collection known as Sahih al-Bukhari ruled by Sunni Muslims as one of the most genuine Hadith collections. Afterwards we will arrive in Bukhara city and spend the night in the hotel. 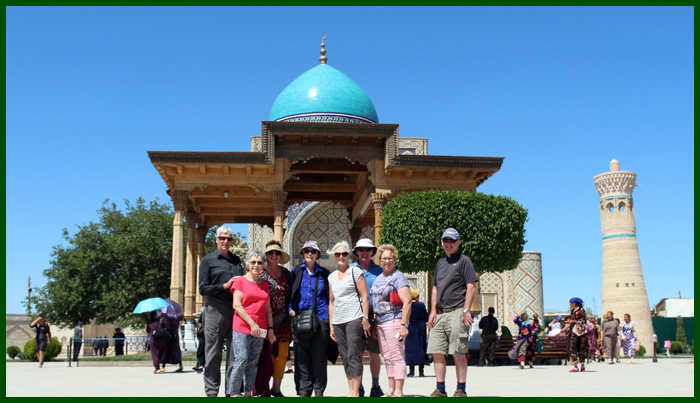 Day 4: Bukhara
We are glad to amaze you by the city tour. Visit the most ancient citadel in Bukhara (4th century) - Citadel Ark. It connected several dynasties of Bukhara Empire. After that we will drive to Samanids mausoleum. A very beautiful masterpiece of 9th and 10th centuries. Then we will visit.

Chashma Ayub - Job’s well and Bolo-Hauz mosque. It is famous for forty columns which are dedicated of Bukhara governor Abu-Fayud Khan. Moving on we will visit shopping domes and madrasahs of Bukhara named Nodir Divan Begi , it is also considered to be the part of Lyabi House Ensemble. In the end of the day we will visit the beautiful Poi Kalon complex of the 12th and 16th centuries consisting of three structures as Kalon minaret, Kalon mosque and Mir Arab Madrasah. Overnight will be spent in the hotel. 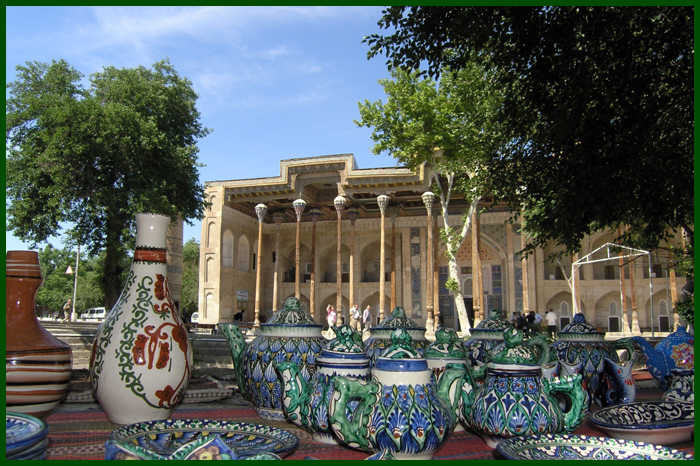 Day 5: Bukhara – Khiva
Early in the morning, we will have travel to the one of the most beautiful cities - Khiva.  In the course of the tour you will find more than 140 architectural monuments. You will be impressed by narrow green streets, gardens and others. Monuments are very close to each other. You will pass from Khiva to Bukhara through famous Kizilkum desert. There is wonderful view Amu Darya river which is considered to be the deepest river in Central Asia, shaped by the Panj and Vakhsh in Tajikistan as well as flowed out into Aral Sea. Being in Khiva, you will have a break. The night will be spent in the hotel. 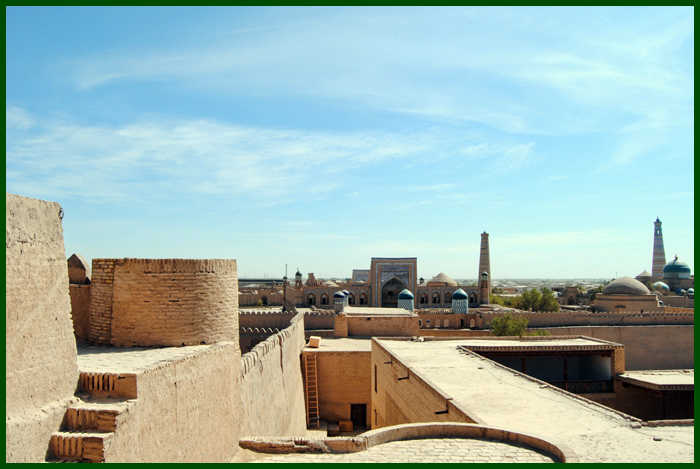 Day 6: Khiva – Urgench  – Tashkent
We are glad to impress you by Khiva city tour. Take a chance of getting impression of the oldest city of Uzbekistan. It is situated inside of Ichan-Qala.  The inner city in Khiva is surrounded with sturdy walls. Visit old sound buildings, palaces, mosques, Madrasahs, Mausoleums, Minarets, Caravan-Sarais and Bathhouses altered Ichan-Qala into magnificent city-monument. In Ichan-Qala you will see over 400 traditional dwelling houses and 60 architectural monuments. It is important to note that in 1969 Ichan-Qala placed a historical as well as architectural conservation area. We recommend you to visit the Kunya-Ark (17th century). It was found by Muhammad Arang Khan. There is Kalta Minor minaret and Tash Khouvli palace which inspires a great sample of Khorezm architectural mastership dating back to 1830s. We are sure you will like it in tours in Uzbekistan. Afterwards you will have evening flight to Tashkent. Overnight will be in the hotel.

Day 7: Tashkent – Flight
After breakfast you will transfer to airport and flight to the next destination.