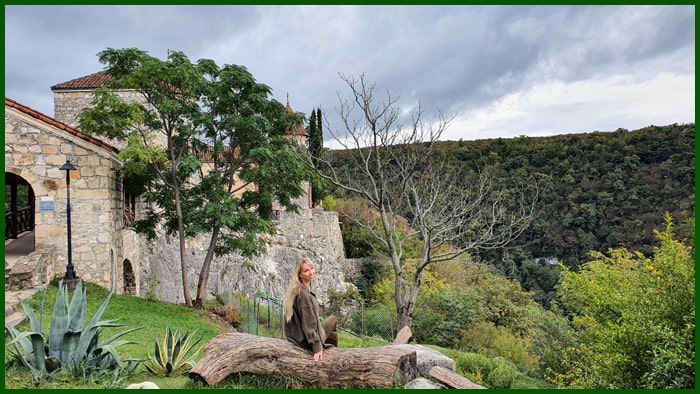 Day 1: Tbilisi
At Tbilisi International Airport, your driver will meet you and transport you to Georgia's capital, Tbilisi. You will go on a city tour today. Tsminda Sameba, Georgia's tallest temple and the Georgian Orthodox Church's main church, is well worth a visit. Then you'll travel to Metekhi's historic area to view the Assumption Church, which sits on a lovely hill. The next sites to see are Rike Park and the contemporary Bridge of Peace. The cable car will take you to the Narikala fortress, which offers spectacular views of Tbilisi. After that, stroll around the Botanical Garden to see the beautiful waterfall. The sulphuric baths, a famous spa complex (XVII-XIX cc.) built on natural sulfur springs, may be seen along the road. Later, explore the Sioni Cathedral and Shardeni Boulevard, which is lined with inviting cafés and art galleries. It is one of the most well-known landmarks in Old Town. You will spend the night at the hotel.

Day 2: Tbilisi – Kakheti – Telavi
Early in the morning, you'll go to Kakheti, a scenic region known for its exceptional Georgian wines. You'll go to Telavi, the heart of the district, which is recognized for its beautiful scenery and superb wine. Then you'll go to the Chavchavadze family's Tsinandali estate, which is held by a well-known Georgian dynasty. The estate is noted for its incredible green maze and cellars, which house a unique assortment of Georgian and European wines. Then you'll go on an excursion to Batonis Tsikhe Fortress. You will learn about local wines at the Khareba vineyard. The tour will culminate with a wine tasting and a master class on how to prepare Georgian bread shoti. You will spend the night at the hotel.

Day 3: Telavi – Signaghi – Tbilisi
You will travel to Signaghi in the morning. It's a romantic tiny village with an architectural style reminiscent of Italian villages. Then you'll go to the Bodbe Monastery, where Georgia's enlightener, Saint Nino, is buried. In the area, there is a spring known as "Nino's water," which erupts from the ground. Spring is said to be pleasant and to have the ability to heal a variety of diseases. The journey concludes with a visit to David Gareja, a rock-hewn monastery complex founded by David (St. David Garejeli), one of the thirteen Assyrian fathers, in the sixth century. The cave systems created by David Gareja are notable for their uniqueness and rarity across the world. You will spend the night at the hotel.

Day 4: Tbilisi – Gudauri – Tbilisi
This day starts with a trip to Ananuri, a medieval fortification on the Zhinvali reservoir's beaches. It's a beautiful architectural edifice in great shape. It was formerly a major defensive bastion that saw combat in a number of battles. Continue to Gudauri, a beautiful resort town 3000 meters above sea level. Skiing, climbing, and active summer vacations are all popular in this area. You'll arrive at a gorgeous Stepantsminda village at the foot of the spectacular Mount Kazbek after a small halt at the Sour Waters of Vedza. Because of its history and beautiful surroundings, visitors flock to the ancient Gergeti Trinity Church, which is positioned 2170 meters above the settlement. You'll be escorted up the hill to the church to take in the views and learn about the history and wealth of Gergeti. You will spend the night at the hotel.
Day 5: Tbilisi – Mtskheta – Kutaisi
Today you will go to Mtskheta, Georgia's spiritual capital. The confluence of the Aragvi and Mtkvari rivers may be seen from here, which is a spectacular sight. The splendor of these lakes will not disappoint anyone. Then go to Jvari Monastery and Svetitskhoveli Cathedral, Georgia's oldest and most significant cathedral (XI century). If you want to learn about the traditions and secrets of Georgian winemaking while also hearing intriguing legends about the Georgian royal family, a visit to Chateau Mukhrani is a must. We will be taken on a tour of a enormous castle, cellars, gardens, and vineyards. After an excursion, you will drive to Kutaisi. You will spend the night at the hotel.

Day 6: Kutaisi – Martvili Canyon – Kinchkh Waterfall – Prometheus Cave – Kutaisi
In the morning, you'll go to Martvili Canyon, one of Georgia's most famous canyons, to see the actual beauty of western Georgia. It's possible to find it in the Megrelia area. It has been running for millions of years, building a canyon as deep as 40 meters and as long as 2,400 meters. Those who want to take a boat excursion across the beautiful countryside can do so. You may also go to Okatse Canyon, Georgia's other natural wonder. In the area, you'll find Kinchkha, one of the country's highest waterfalls. The expedition continues to Prometheus Cave, located 20 kilometers west of Kutaisi in Georgia. The cave is not only the most well-known of its sort, but it is also Georgia's largest. It's known for its subterranean streams and stalactite and stalagmite reliefs. You'll be going back to Kutaisi. You spend the night at the hotel.
Day 7: Kutaisi – Borjomi
You will see historical and ecological attractions in Kutaisi and its vicinity in the morning. The UNESCO-listed Gelati Monastery, Georgia's most valuable cultural treasure and a living symbol of the Golden Age, is our first visit. Facades of big, finely hewn stones, harmonious proportions, and blind arches for exterior embellishment define it. The excursion continues to Motsameta Monastery, which is nestled under the Tskhaltsitela-Red River on a slope. This is one of Georgia's most beautiful temples. It is a collection of monasteries located on a rocky outcropping in a beautiful setting. You will drive to Borjomi once the voyage is over. It is a well-known spa town with mineral springs that are said to be therapeutic. You will spend the night at the hotel.

Day 8: Borjomi – Vardzia – Uplistsikhe – Tbilisi
You'll go to Vardzia after breakfast to learn about the region's varied cultural heritage. You'll go to the St. Nino monastery, which has a small dairy run by local nuns and is known for various unusual dairy kinds. You proceed to Vardzia, a beautiful Golden Age cave complex, after obtaining great photographs at Khertvisi Fortress (X century) (XII-XIII centuries). The structure was used as a sanctuary for residents in ancient times. In Akhaltsikhe, see Rabati Castle, a famous castle dating from the thirteenth century. Several medieval castles, towers, and churches make up this beautiful complex. We'll stop in the cave settlement of Uplistsikhe on our trip to Tbilisi. An ancient cave settlement constructed into the volcanic rock of the Kvernaki mountain is one of Georgia's most important cultural sites. Then you'll return to Tbilisi by car. The night at the hotel.

Day 9: Tbilisi – Airport
In the morning you will be transferred to airport.